The Subjects in the Menu above provide information on each of the stated topics. The buttons below are for Actions—use these buttons to sign up for the convention. When booking the Hotel, select the Hotel Booking Tab, then go to "Add Special Rate or Code" and then check "Group Rate" and then enter the hotel booking code, 3764683.   Hotel room reservations may be made in the date range for the convention of June 7 thru June 11 only. Any reservation outside of this range must be made separately at the then current Drury rate.

NOTE: Use Register Now to register for the 2023 PSR Convention or to add items to your registration.

Enjoy the Privilege of a Private Steam Train

This special train is chartered for the exclusive use by NMRA Members and guests.  Ride with your fellow railroading enthusiasts.  There are two features of this ride that are not available on any other standard Grand Canyon train.  You get an exclusive tour of the engine shop the day before the ride while engine 4960 is being fired for the trip.  On your return to Williams, the train will stop for passengers to disembark and shoot photos of a run-by up a 4 percent grade.

What makes The Grand Canyon Special different from other trains out of Williams, AZ?

The Grand Canyon Railroad operates daily train service from Williams, AZ to the Grand Canyon.  On the first Saturday of each month, they offer a steam train as well, but it is actually a double headed train with both the steam engine and a diesel behind.  There are many factors that make the Grand Canyon Special a truly unique experience:

1.Truly all Steam powered train—just like the “old” days

2.Engine house tour prior to the train ride (on Friday)

3.Exclusive to NMRA members and guests

4.Early morning departure for cooler temperatures-and beat the crowd at the Canyon.

5.Photo run by at Mile marker 4, “The Pumpkin Patch”

Choose from Four Classes of Service 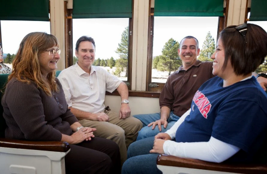 This is the "Steam Lovers" car. It is third behind the engine providing a better photo angle around the bends while providing the  sights, sounds and smells of the steam engine. Experience train travel circa 1923 in our classic rail cars that have bench style seating and windows that open for your enjoyment.

This is a Harriman Style car built by the Pullman Palace Car Company in 1923.  These cars served their entire career on the San Jose to San Francisco commuter run, before being retired to the Oakland California yards in 1984. It was acquired then by GCRR 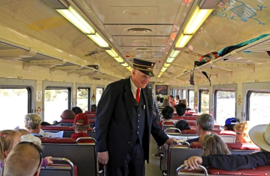 This is the second car in our consist.  Travel to the canyon in streamlined cars made in the 1950's with big windows and air conditioning.  This car is ADA accessible.

This a Budd coach that started out with the Boston & Maine Railway and were called "Highliners."  It was converted to the current non-powered coach configuration in 1983 and used in the Metropolitan Boston Transit Authority then the Virginia Rail Express for commuter service out of Washington DC, before being acquired by the GCRR. 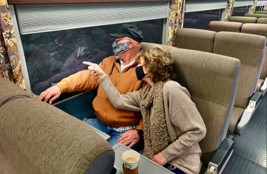 The first car in our consist is the "Bucky O'Neil" which features over sized seats, big Windows and has A/C. There is a cash bar in the back of the car that will serve water, sodas  and alcoholic drinks to all passenger classes.  Pre-ordered lunches will be obtained here as well.

This car was delivered to the Southern Railway in 1949 where it served on the so-called "varnish" passenger trains like the Southerner, Tennessean, and the Royal Palm and went on to serve on the Alaskan Railroad before coming the GCR.  The name of this car honors the GCR original founder, Buckey O'Neil, who lobbied for many years to get train tracks laid to the Canyon.

Travel like a rail baron in our plush parlor car, "Santa Fe." This car features sofa-like seating and a private cash bar serving refreshments throughout the trip.

The Santa Fe was built in 1948 for the Minneapolis & St. Louis Railroad. The car was acquired in 1956 by the Rock Island line where it served until the end of passenger service in 1978. After nearly 10 years in storage, the Santa Fe was sold to the Roaring Fork Railway where it was remodeled as a luxury parlor lounge. It was the leased to Copper Canyon Tours, leased again in 2002 to the Acadian Railroad.   GCR became the proud owner in 2004, and it reentered service as Santa Fe shortly thereafter. 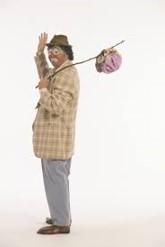 Hobo Jo sez: Treat your family and friends to a once in a lifetime exclusive train ride to the Grand Canyon.